Shopping Cart
Your Cart is Empty
Quantity:
Subtotal
Taxes
Shipping
Total
There was an error with PayPalClick here to try again

Thank you for your business!You should be receiving an order confirmation from Paypal shortly.Exit Shopping Cart

This 93-acre warm water pond is characterized by brown water with a transparency of five feet. Average depth 15 feet and maximum depth is 33 feet. Aquatic vegetation is fairly light. More than half (60%) of the total shoreline (1.5 miles) has been lost to development.The pond is located a half mile northeast of Route 58 near Monponsett Center.Access is provided by a dirt launch located off Plymouth Street. The launch is suitable for car top boats and canoes and is owned by the town of Pembroke.

The general fish population was last sampled in June of 1981. Nine species were observed at that time. Listed in order of abundance they are pumpkin-seed, bluegill, yellow perch, white perch, golden shiner, largemouth bass,chain pickerel, brown bullhead and American eel.

This pond has very low productivity and the general fish population exhibits low stock density. Largemouth bass and chain pickerel display good growth rates due to the lack of competition, but they are not numerous. Stunted sun-fish dominates the pond. The yellow perch are generally less than nine inches long and display below average growth rates. Anglers can always find some action here, however, and an occasional large bass or pickerel is to be expected.

Little Sandy Bottom Pond is a 54-acre pond in the Bryantville area of Pembroke. The pond is a Class A tributary to Great Sandy Bottom Pond, a public water supply for the Abington/Rockland Joint Water Works. 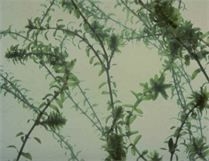 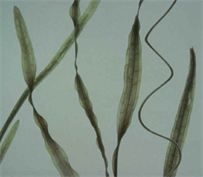 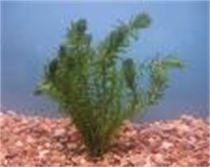 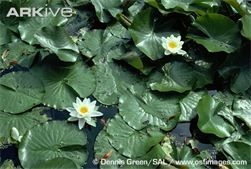 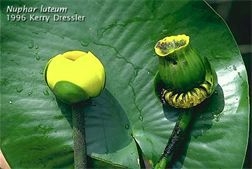 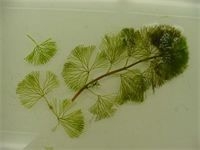 Hydrilla is a submersed plant. It can grow to the surface and form dense mats and can be found in all types of water bodies.

Hydrilla stems are slender, branched and up to 25 feet long. Hydrilla's leaves are strap-like and pointed and grow in whorls of four to eight around the stem. The leaf margins are distinctly saw-toothed. Hydrilla often has one or more sharp teeth along the length of the leaf mid-rib. Hydrilla produces tiny white flowers on long stalks and also produces 1/4 inch turions at the leaf axils and potato-like tubers attached to the roots in the mud.

Hydrilla reproduces mainly by regrowth of stem fragments; also reproduces by growth of axillary buds (turions) and subterranean tubers; tubers can remain viable for more than 4 years and a single tuber can grow to produce more than 6,000 new tubers per m2.

Hydrilla can grow in almost any freshwater, only needs a few inches of water, and can grow in only 1% of full sunlight.

Aquatic Control Technology did an exellent job erradicating hydrilla last summer on Hobomock Pond, but it must be maintained for several years to come. 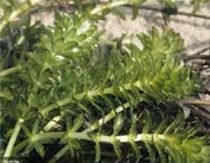 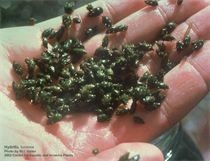 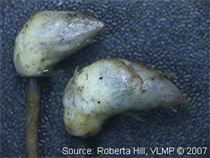